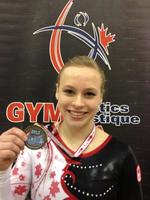 SHERWOOD PARK, Alta., -- In her first competition since the Olympic Games in August, gymnast Ellie Black of Halifax showed off new moves on uneven bars, beam and vault to easily win the women’s senior title Friday night at Elite Canada.
Black, last seen in competition grimacing in pain after injuring her ankle during the women’s Olympic vault final last August, chalked up a total score of 54.525 points en route to her first Elite Canada all around title.
Meaghan Chant of Waterdown, Ont., placed second with 52.675 points and Casey Carvallo of Georgetown, Ont., was third at 51.125.
“This was definitely a bit different for me coming here after the Olympics as one of the older seniors now on the team,” said Black, who contributed to Canada’s best ever team finish at the Games, placing 5th in the eight team final.
“There’s always some nerves going into a competition but I was really excited to get back into the groove.”
Black, who topped the field on floor, vault, and beam and placed third on uneven bars, will go for more medals in all four events in Sunday’s apparatus finals.
On the first day of the men’s senior competition Anderson Loran of Saskatoon ranked first, followed by Ken Ikeda of Abbotsford, B.C. and Zachary Clay of Chilliwack, B.C.
In the junior division René Cournoyer of Montreal took the lead followed by Aaron Mah of Vancouver and Matthew Halickman of Montreal.
Both the juniors and seniors compete again on Sunday for the medals.
In other events on Friday, William Emard of Montreal and Samuel Zakutney of Ottawa finished first on day one in the argo and tyro divisions respectively while Megan Roberts of Toronto topped the field in the women’s novice category.